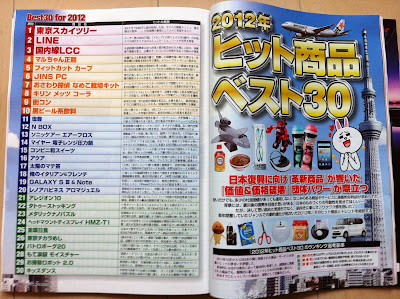 The lifestyle magazine, Nikkei Trendy, published by affiliate of the Japanese daily financial newspaper Nihon Keizai Shimbun, has revealed 'Best 30 Consumer Hits for 2012' as well as 'Top 20 Hit Products Predictions for 2013' on November 2.
﻿ 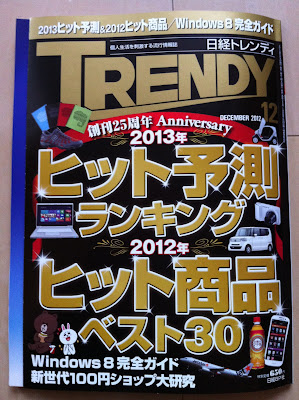 (Nikkei Trendy HP: http://trendy.nikkeibp.co.jp/, Japanese only)
Nikkei Trendy has been introducing popular electronics, new gadgets, the latest entertainment spots and unique services available in Japan and it evaluates how they affect the people's life with fully coloured pictures.
The end-of-year hit-ranking edition in this monthly magazine has now become the national showcases which are carefully investigated based on sales, innovative ideas, and the impacts on the market and the society as a whole. 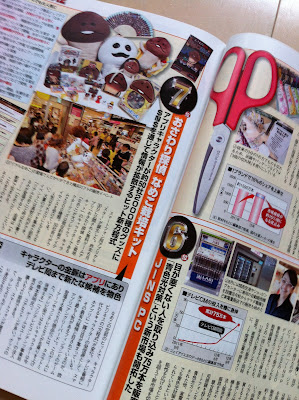 Ranking number 3 - Domestic low-cost carriers(LCC)
Three new budget airlines; Peach Aviation (http://www.flypeach.com/home.aspx), Jetstar (http://www.jetstar.com/jp/en/home), and Air Asia (http://www.airasia.com/jp/en/home.page) opened in Japan this year. Now, consumers can make their choices on the services and costs. It has a big impact on other domectic transport industries like bluet trains and long-distance bus.

Ranking number 2 - 'Line'
'Line' (http://line.naver.jp/en/) is a fast-growing smartphone application for free-calling and free-messaging. It has launched in June 2011 and it gained over 60 million users inside and outside Japan. The stickers called 'stamp'(below) can be posted into chat windows as a means of visual expression which led the great success of the expansion. 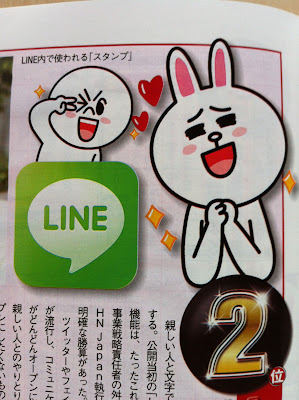 Ranking number 1 - Tokyo Skytree (http://www.tokyo-skytree.jp/en/)
It is the world number one tower - the world's tallest free-standing broadcasting tower with the highest point of 634 meters. Tokyo Skytree was opened on May 22, 2012 and 21 million people have visited the tower and the shopping complex called 'Tokyo Skytree Town' by the end of September. It has become the symblic landmark which brings up Japan from the tragety of the Great Earthquake of 2011. 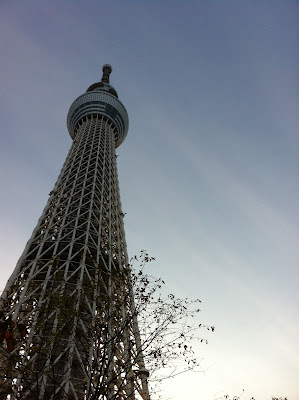 There are many Japanese-English terms in the list of the Hit Product Predictions for 2013 in Nikkei Trendy. They are: the Japanese style 'long trail', the goods and food for anti-'Locomotive Syndrome', handy size 'tablet', 'water flavour', 'subscription' online shopping, 'synapsology', 'earth cafe', 'micro EV' etc.
The trends will overtake us unless we keep up the speed of the trend.
Y★
1 comment:
Label: Trendy goods
Newer Posts Older Posts Home
Subscribe to: Posts (Atom)